You are using a browser version that we do not support. Please use one of these supported browsers:

Read the latest news from your PUD.

Okanogan Irrigation District is seeing huge energy savings with new pumps at their Shellrock station, earning them an energy efficiency incentive check of $87,782.75 through Okanogan County PUD. The PUD manages these incentive programs through funding by the Bonneville Power Administration, a major source of its electricity.

District Manager Brad Armstrong said three out of four pumps had been replaced. The new pumps contain stainless steel parts instead of bronze, which will last longer. Ultimately, the 1979 pumps needed replacing because rebuilding an old one costs more than purchasing a new one. The incentive check will help the district fund future upgrades, including the purchase of new motors.

The energy and maintenance savings will help to keep irrigation rates low for the district’s approximate 1,020 accounts, which represents more than 5,000 acres.

Photo info: Three of the four pumps have been replaced at the Shellrock pump station (blue ones are new). 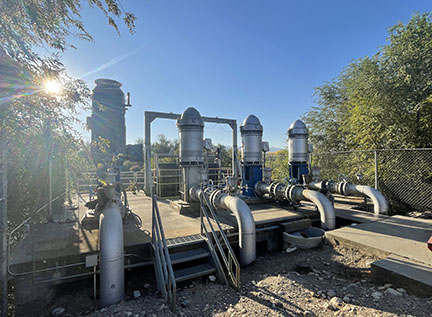 Okanogan County PUD commissioners approved an application for a broadband expansion grant that, if awarded, would build direct fiber to homes and…

SCAM ALERT: What has been reported and what to do

Scammers have been using the phone and email to try to get personal information and steal from our customers, often claiming to be the PUD or…

The Okanogan County PUD board heard reports and 2023 previews during their last meeting of the year Dec. 12.

(As a reminder, offices…

Thursday - December 8, 2022
There will be a special meeting of the Board of Commissioners of Public Utility District No. 1 of Okanogan County on Monday, December 12, 2022,…

Okanogan County PUD commissioners approved the 2023 budget, which includes revenues of $69.5 million, expenditures of $55.8 million and capital of…